This is what I do.
Neutron stars, usually detected as pulsars, are laboratories to test the laws of physics at extreme conditions. With radii of about 10 km and masses of approximately 1.4 solar masses they are among the most compact objects known to exist. Essentially, neutron stars are dead stars that emit no energy through nuclear fusion which would make them detectable like ordinary stars. Instead, they need to either be accreting matter from, e.g., a companion star which makes them visible as an X-ray source. Most commonly, however, they are detected in the radio regime as pulsars - objects that appear to emit radiation in a non-continuous manner but in a pulsed way with very stable pulsation periods between a few milliseconds and up to ten seconds. These pulsars are highly magnetized neutron stars whose beam of emission only strikes the observer at intervals equal to the rotation period of the emitting object.
As such pulsars, and in particular the millisecond pulsars, are very accurate clocks that can be used to perform many very different kinds of astrophysical experiments. The most sophisticated applications of pulsars as clocks are based on pulsar timing and include the determination of binary orbit parameters and tests of general relativity such as the measurement of the Shapiro delay or the detection of gravitational waves.

For such pulsar timing experiments to deliver robust results one needs to know precise positions, distances and proper motions of the used pulsars. Alternatively to pulsar timing, the only model-independent, self-consistent technique to measure these parameters with the required accuracy are repeated, long-term observations at high angular resolution. The angular resolution even of the biggest radio dish (Arecibo) is insufficient for this task. Therefore, we use radio interferometry - the combination of several radio telescopes around the globe - to measure all three parameters with sub-milliarcsecond accuracy. Such measurements allow us to trace the pulsars' trajectory back to their possible birth location in the Galaxy. For pulsars that reside in globular clusters, we are in principle able to measure their orbits within the cluster's gravitational potential and, hence, we can infer a central mass. Other applications of high precision astrometry with pulsars include the determination of orbits of globular cluster about the Galactic center and the possibility to tell members of a globular cluster from non-members. 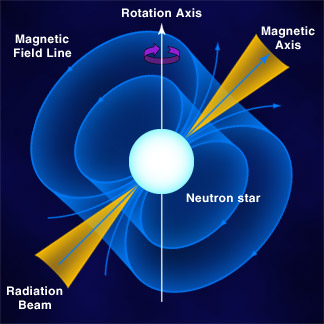 Sketch of a pulsar. 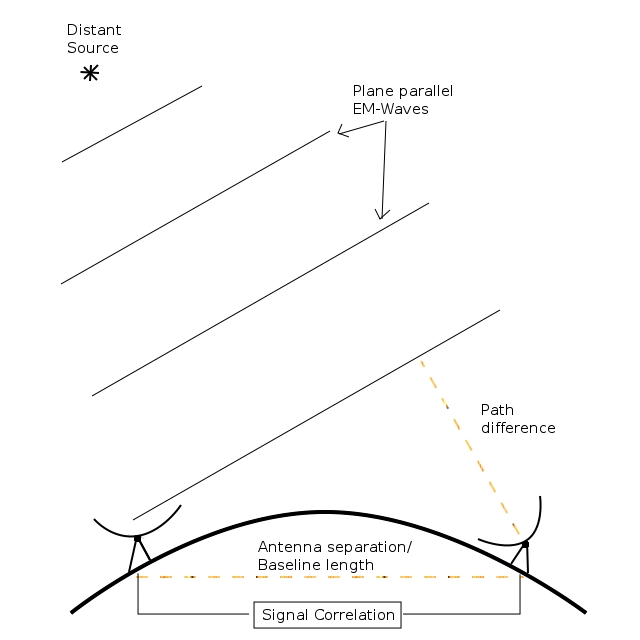 Sketch of a two-element
radio interferometer.

M15 (NGC 7078) is a massive globular cluster at a distance of about 10.3 kpc. It is known to host a number of compact radio sources among which are eight millisecond pulsars (MSPs) and two low-mass X-ray binaries (LMXBs). Four of the MSPs and one LMXB are located within 4.5 arcseconds of the cluster core.
Extensive studies of the stellar surface density profile and of the stellar velocity dispersion profile of M15 indicate a high mass concentration in the center of the cluster. The nature of this mass concentration (~3400 solar masses within the central 1 arcsecond) is unknown. Current models favour either an intermediate mass black hole (IMBH) or a collection of dark remnants such as neutron stars to reside at the core.

In this project, we measure the proper motion of the known pulsars in M15, we search for compact objects that have been missed in earlier radio observations, and we look for a signature of the proposed IMBH at the core of this cluster. To achieve these goals, we observed M15 in a multi-epoch VLBI campaign. The array we chose consisted of eight radio dishes spread over Europe, the USA, and Puerto Rico. We reach a sensitivity of 4 μJy and a beam size of 2x6 mas. Find my Master Thesis here.
Back to Top 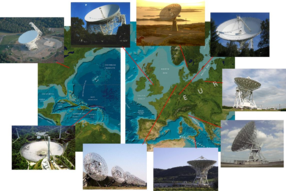 The VLBI array that we use.

The COSMOS ( Cosmic Evolution Survey) field spans an area of two square degrees close to the equatorial plane. It is a panchromatic survey covering the electromagnetic spectrum from the radio regime up to X-rays. The goal of the survey is to study large scale structure and the evolution of structure formation in dependence on environment.
In my bachelor thesis I analyzed the radio observations of the COSMOS field that were obtained with the VLA at 1.4 GHz. In particular, I studied the extended radio sources that were found in the survey. I constructed a catalogue gathering information about, amongst others, the Fanaroff-Riley type, the photometric redshift, and the environment of each target.
Back to Top 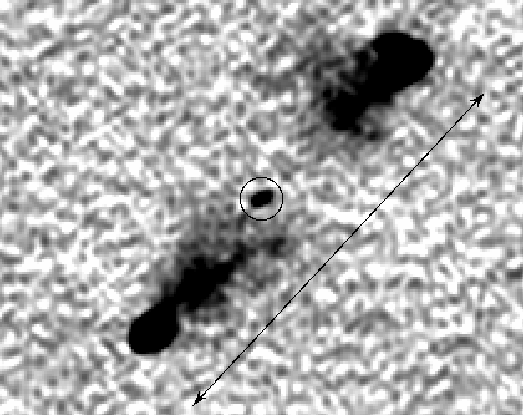